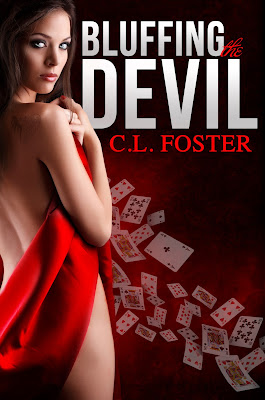 Blurb ~
After losing her fiancé to a freak accident, Alexia Riley decides to swear off relationships and focus her energy on conquering the male-dominated sport of professional poker.
When Alexia finds herself being visited in her dreams by a mysterious new man, she begins to wonder if her world is slowly starting to unravel around her.
Tested by a double-dealing nemesis on the tables and tempted by a mysterious "dream man", Alexia soon contemplates making a deal with the Devil to rid herself of these torments. What bargain will she strike with the Dark Prince to get what she wants? As temptation for a mysterious dream man weakens her resolve, a desire to defeat her greatest rival beckons her. Will she sacrifice her soul for victory? Love? Or does she want something else entirely?
The stakes have never been higher for Alexia than they are when she is bluffing the Devil!

"Come on! Let's sit on the beach for a few minutes while we devour the goodies!" Rhea's eyes shimmered as she knew that would be my very favorite idea.
"You people and your beach food," Carly complained lightly. "Can we ever have food in a restaurant with forks and linen napkins, sexy waiters, champagne, sparkles, and food that makes us forget sex long enough to just wanna roll our bodies in it?"
Everyone stopped almost in the middle of the busy intersection. "Really, Carly? Food is super exciting to you. I never noticed your food-slut mannerisms before now," Rhea chuckled.
"I've heard her talk about food like that forever, but I never knew she wanted to roll around in it and name her babies after ingredients," I joked back.
As we finished crossing the street, Victoria added, "Maybe we should get her a chef boyfriend? Then she might be able to keep some meat on her bones."
"Yeah right, like she ever holds on to an ounce of anything ever. I think Carly has the perfect body," I said admiring her. I had to work-out like a maniac to keep my figure. Everyone in my family had health problems of some sort, and I was always a stickler for eating the best way I could so I would avoid adding to the genetics problems. I figured if I did the best for my body, maybe it would work in my favor at some point. A girl can dream, right?
"Well, it wouldn't hurt her to fill out a little more. She looks like if we ever sparred with her, she might break in half," Rhea said as we came to an uninhabited spot on the beach. She crossed her legs and sat down Indian style on the sand. "Come on guys, let's dig in!" She popped the top to the box and I immediately drooled. The perfect pizza was hard to come by, but this one looked pretty amazing. She opened the bag and handed us all a napkin and bottle of water or soda. Then grabbed herself a slice of pizza as I was choosing one also.
We all sat around and munched our pizza silently. It was the only time we were quiet as a group, when food was involved. Usually food didn't even stop us. We would talk with our mouths full, laugh, choke, laugh some more, but apparently tonight was our night to be quiet and ladylike while in public. Someone should take note. That didn't happen often.
Once, we had a baking sleepover, which was just an excuse for us to make an unrealistic amount of sweets all night and pig out on them. We claimed it to be an experiment and said that we were trying out recipes so we could all agree on what we would make for the next few bake sales and things we participated in for various organizations. We all knew it was just because we are carbaholics and needed a fix. What better way to carb out than with your girlfriends? Movies, gossip, and carbs was the perfect evening for us.
Jamison had come home during the sleepover and just stared at all of us laying across all of the furniture with cookie, pie, and cake crumbs all over our faces, mouths full of sweets, laughing uncontrollably. He kissed my forehead and said that he would vacuum in the morning and for us to have an awesome time. Then he went to our room, shut the door, and didn't come back out for the rest of the night. Smart guy!
I polished off my third slice of pizza and leaned back, digging my elbows into the sand. "Oh my goodness, Rhea! That pizza was incredible. Thank you so much!" I said right before downing the rest of my water.
"It's really helpful that we all like the same kind of pizza, isn't it? I don’t know any other chicks that like the carnivore special," Rhea joked.
"What? We need our meat, too! Bacon is not just for men, you know?" Carly announced happily. 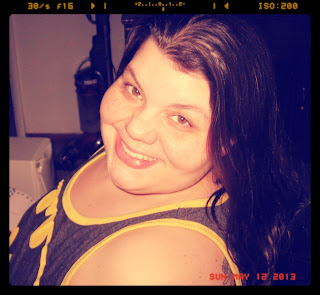 BIO ~
CL Foster is a brand new writer with big dreams and lots of avenues she wants to travel. She decided in September 2012 that she wanted to become a writer. She immediately entered a contest with a partner and won with their Halloween horror entry, Billy Carver. (Title available in All Hallow's Eve anthology). She also has a true story entry about hope rising from despair in the Reality Bites anthology.
She has also co-written two other novels with a partner using the pen-name Sierra Sofia, writing in the erotica and paranormal romance genres.
Bluffing the Devil is her debut novel, which came to her in a dream. For an insomniac, that was a shocker to everyone.
Originally from Florida, she has lived all over the world, but has settled down in Pennsylvania.... for now! She has a Bachelor's degree in Criminal Justice, minoring in Psychology and Forensics. Which means you don't want to cross her because she knows how and where to hide a body so it's never found!
She proudly admits to hearing voices in her head, but at times, her characters' impromptu visits can be rude and annoying. Thankfully, she has adequate patience for their shenanigans and can out ninja them any day of the week.