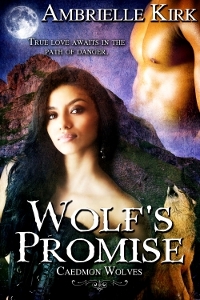 Goodreads Blurb:
Selene is thrust into the aftermath of Caedmon pack rivalry when determination to help a friend leads her to the foothills of the Virginia mountains. She doesn’t anticipate that her generosity would earn her a place behind bars and at the mercy of man who saves her from a sentence worse than death. Soon she discovers that Nick is far from ordinary. Under the façade of his commitment to protect her from evil hides a secret that shatters her faith in him.

Nick knew his life would be forever changed when Devin, the new Caedmon leader, honors him with the title of Second-in-Command. With this responsibility, he’s introduced to a web of pack politics and threats. Darius, the banished wolf who lost the most coveted title within the pack, turns out to be a sore loser, and he demands either complete dominance or total destruction. Someone must stop him before he tears down the unity that has held the pack together for decades.

In the midst of it all, he meets a tempting brazen beauty. Selene is not just any woman, and the wolf inside reminds Nick of this fact every time she’s in his presence. She awakens raging passion within him, and he desires her like no other. Nick’s past misfortunes has taught him many things. For one…never trust a woman with his heart.

True love awaits in the path of danger, but will Selene and Nick let the chaos destroy their bond?

My Review:
This is book 2 of the Caedmon Wolves series and is packed with just as much excitement and sensuality as the first. Wolf’s Promise is a story that many fans of the genre will enjoy an escape with and it can be read as a stand-alone if desired.

Selene takes a trip with the very best of intentions and ends up in the worst possible situation. Besides learning about the paranormal world, she meets one of the worst of the bunch. Thank whatever god or goddess that’s on her side, she meets the handsome werewolf Nick and he assists her out of her sticky situation and brings about some of the very best (wink wink).

Nick is just looking for a bit of reminiscing and peace before settling back into the real world. What he gets is anything and everything but peace!

Mating is a serious business and very…permanent. I’m very happy Selene and Nick found one another and look forward to more of them in the future.