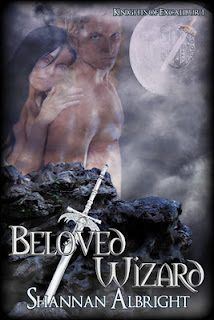 Goodreads Blurb:
Merci Tramaine is not happy to be called back into service by her old boss Arthur, especially when she is charged to find her missing ex-lover. Drake Monroe is Merlin reincarnated. With his powers bound by the Goddess Nimue, he has become a skilled fighter, but is no match for Nimue who kidnapped him, determined to destroy him forever.

The bloodline of Morgan Le Fey taints Merci, keeping her on the edge between light and dark. The goddess’s wicked trap springs shut, leaving both Drake and Merci racing against the clock. Passions ignite once again, but are they too late to plan a future or will they be torn from each other?
This time for eternity.


I LOVE the concept of a modern day Arthur and his knights (I’ve always had a secret crush on him, shhh). This is a great start to a series that is magical, sensual, exciting and an all-around great story that any fans of the genre will enjoy!

Merci is a beautiful woman that’s also tough as nails. Caught between light and dark due to her heritage. She does not want anyone to know about the darkness within her. Including the man she loves. The only man for her in this life and the next.

Drake is one hot knight! He’s another one that is as tough as tough can be. He comes off a cold, a bit cruel and unfeeling… But I feel he has the right to. After all, he’s the reincarnation of Merlin and his powers have been bound for a long time. That’s a form of torture, undeserving at that. All because of an evil malicious female that (in my eyes) just has nothing better to do. He loves a woman, a very special woman, but is afraid to get too close to her because of the evil wench always at his back. Can love conquer all in this case or is it never meant to be for these two tortured souls?

Beloved Wizard is a quick short read that leaves the reader wanting more in the very best of ways. I look forward to what’s to come in the rest of the series and to so much more of Arthur and his knights ;)