A.R.: Hello Grinelda and thank you for visiting my blog! Let’s start off with some fun stuff:

I love to read. My love for sticking my nose in a book used to keep me in all kinds of trouble as a kid. I’d sneak off with a book and neglect my chores. Though reading and a love for words and word use were instilled in me at a young age, I received many a browbeating for missing work I needed to get done. The same thing happens around here with writing. When I’m over anxious to get in the kitchen and get work done, I know I’m avoiding writing. When the words are flowing like hot lava, I sometimes forget to eat.

Grinelda:
I don’t really read love stories. Romance isn’t anywhere near the top of the list of things I enjoy reading or watching, but I enjoyed the romance between the two main characters inThe Far Pavilions by M. M. Kaye. I read it as a teenager after having seen the mini series. It was well done on tv and the costuming excellent. The book captured my imagination and pulled me into the world of the characters as a participant rather than a spectator.

A.R.: If you could be invisible for a day, what would you do?

Grinelda:
I’d get the scoop on as many drug lords and other criminals whose activities undermine society then turn the info over to the appropriate law enforcement agency. As for politicians whose regard for the wellbeing of the American people is no greater than that of society’s criminal element, they’d come first.

A.R.: Are you spring, summer, fall, or winter? Please share why.

Grinelda:
I’m very Spring. I embrace each new opportunity, each new encounter with anticipation for rebirth, renewal, and change. But, because I’m multi-faceted as an individual, I am also Fall. I try to know when to say goodbye to those things which have run their course in my life requiring me to let go.

A.R.: What's the one thing, you can't live without?

A.R.: What is your favorite quote?

A.R.: What is the first thing you notice about the opposite sex?

Grinelda:
Whether or not they’re controlling and condescending. I won’t stand for a relationship in which I’m subjected to either. Whether they allow me to be me and do for myself without unsolicited assistance.

Grinelda:
Pen, B2P to be exact. I like the way it moves across the page.

A.R.: What's your next project?

Grinelda:
I have several books in work. I’m actually working on a mainstream book now under one of my pen names. One, Book II of The Kalaydan Chronicles, is unfolding in a patchwork quilt fashion. Two, my ghostly lover stories, A Ghostly Tale, Or Two, seem to drop in from time to time with a snippet or the next several paragraphs then I don't hear from it for a while. Then, Johnny B. Goode (JBG) seems to show up when I need a pick-me-up and drop in with a chapter. It's my it's my favorite work-in-progress (WIP). BION, I wrote the first book in The Kalaydan Chronicles from chapter one to the end in that order. I added a few things here and there and maybe a chapter or two later out of sequence, but otherwise it was from begin to end with that one.

A.R.: Thank you so much for being here Grinelda. Now let's give everyone a little taste of The Moon-Kissed Chi... 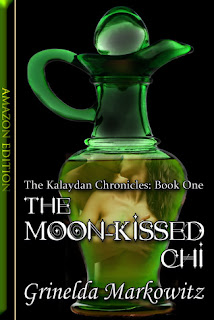 In the city of Kalaydan, Arrinay and Bezhyanya, the senior members of the ruling family, are faced with the early maturation of their daughter, Gayadnae. She must start the training. It’s Kalaydan law. Their daughter has other ideas. After concocting a plan to avoid responsibility and almost succeeding in carrying it out, Gayadnae’s life takes an unexpected turn.

Grayt, the ever-present serving woman to Arrinay, fills many roles and has her fingers in a number of pies. There’s definitely more to her than is apparent on the surface. Along with coordinating activities in the Main House, keeping the young mistress in line, and talking to horses, Grayt has a more secret agenda with a graver responsibilities.

A hint of trouble on the horizon and other darker activities weave their way through the backdrop of this delightful tale which takes place in the city of Kalaydan.

In a residential section of Kalaydan City
Maeb leaned against the window frame and sipped her drink. She looked down into the candle-lit streets of Kalaydan City and watched the progression of a chandler guildsman down the cobblestones until he turned out of sight. A plump dog moved back and forth across the street then stopped to scratch on a door. The door opened and it disappeared through a brightly lit doorway. She turned from the window when she heard Trendo’s booted steps coming down the hall. She heard the sound of his satchel drop to the floor. He strode into the room moments later.

“Hi, Maeb.” He caught her up in a tight embrace after he closed the space between them.

“It was busy. I worked with three boys today to master the stopcock. Two of them are Terza’s youngest twins and the other is their cousin on Terza’s side. Seems their fathers have given up trying to teach them to stopcock.”

“I bet that was a rough session. Terza’s husband taught their other boys and many of their family members as well. The Warriors’ Guild may have a few reluctant volunteers in about four suncycles. Did you succeed?” She slipped her hand into his trews and squeezed his firm buttocks.

“Let’s say I made headway. I’ll go back tomorrow. How was your day?” He opened his trews and allowed them to fall to the floor. He stepped out of them then drew her more closely into his embrace.

“It was about the same as yours. I was called to the Main House to meet with the Mistress.” As his hands rubbed her breasts through her bloozat, she nuzzled his cheek with her lips.

“Oh? Isn’t it too early for their daughter to start the training?” His lips grazed hers.

“Well, I would have thought as much, but she’s precocious.” She looked him in the eyes as her hands followed his hips around and gripped his stanchion.

“So was her mother, but she didn’t start early.” He released one breast and returned her gaze. He covered one of her hands with his and guided it along his koq; pressing one of her thumbs into its head.

“Gayadnae has been leeching for at least six suncycles, possibly longer. She didn’t know until now she’s been doing it.” He groaned deep in his throat as her thumb slipped around the wet dome of his cod-baby.

“I’d wager she’ll keep you busy.” His head dropped lower and his lips caressed her neck while his hands wandered under her bloozat.

“What’s more, she pulls from warriors and they don’t even notice. I was matron for her today while she was with her mother at the guild for a meeting.” She released him and removed her bloozat.

“I can see why they’d send for you. Will you be returning to your station as House Matron?” He rubbed a palm roughly over each nipple.

“I think so. Our rooms are still empty. We could move back in if you’d like.”

She sighed deeply and guided him over to a lounge. She pulled him down on top of her and let her legs fall, one each, over either side. Her lips sought his again. He complied. He leaned on one arm and used the hand of the other to caress and play with her nipples. Her twin mounds were firm and full. She sighed when he bent over and allowed his tongue to play over her skin, exhaling when he pulled first one nipple into his mouth between his moist lips then the other. His tongue made lazy circles over her nipple’s surface.

She pulled her kirtle up to her hips and raised them to meet his pleasure pole. He slid into her tunnel eagerly and without hesitation. She pulled his shirt up and over his head, letting it fall to the ground beside the lounge. She played with the soft white down which furred his chest. Resting on one arm, he slid in and out of her slowly and deliberately. She directed the chi around them into the dense cloud of his virility.

Their pace was deliberate yet urgent, slow and steady. Continuing to slip in and out of her well-lubed sheath, his head dropped down and his mouth took in a breast, as much as would fit. The nails of her one hand raked his back and the fingers of the other gripped one of his twin buns.

“Maudi, give me all of your man milk!”

He said nothing, his mouth still full of nipple and breast. She worked the other nipple with her thumb.   Her tunnel gripped his rod with all her strength. As his energy rose she infused it with the chi energy she allowed through the stopcock. She siphoned his virility with her mind and swirled them both around and through them. The tempest mounted and raged as they worked their bodies together in earnest. Once the storm broke, they grunted and groaned and he collapsed on top of her. She lay there breathing heavily and he lay his head on her chest. Many flickers of a candle passed before either of them spoke.

“I think it would be a good idea for us to move back into the Main House,” he said. His fingers wandered aimlessly over her skin.

“I think so too. So, did you use your talents on the boys today?” She wrapped her legs around his and rocked slowly from side to side.

“Yup! I drained almost every ounce of virility they had and enjoyed the looks on their faces as their cod-babies shriveled up on their nuggets. They listened to me after that.” He covered her mouth with his in a demanding kiss.

“What did they do when you gathered the chi and raised their virility?” She said breaking away from his lips.

“I think they were more shocked by the decline of their koqs than they were impressed by my being able to direct chi energy.” He untangled her legs from his and moved further down on the couch. He sought her grotto with his tongue and lapped their mingled juices as a puppy does a bowl of warmed milk.

“No doubt. You codlings are all the same when it comes to your virility.” She giggled and wriggled out from under him. She jumped up from the lounge and taking him by the hand skipped down the hall, pulling him behind her.

Giveaway
Grinelda will give away a free copy of The Kalaydan Chronicles: Book I ~ The Moon-kissed Chi by drawing. Please comment below with your email address if you want to enter the drawing.