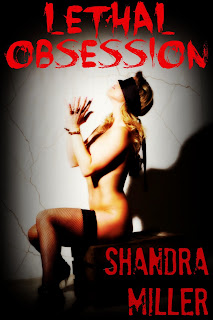 
Angela Martin is chief detective for the Moose Creek, N.C., police department, when a possible murder call comes in. At the scene she finds the body of a woman, hanging from hands bound overhead, eyes blindfolded, mouth gagged. Red whip marks crisscross the woman’s buttocks, the back of her legs. She recognizes the scene, knows exactly what happened to the woman before she died, because Det. Angela Martin was bound and blindfolded, gagged and whipped exactly as this woman had been. By a man she met on line.

A master whose power over her is so strong she’s willing to risk everything – her career, even her life – to be with him again.

LETHAL OBSESSION is a novel of desire and domination, suspicion and fear, and the mysterious way those emotions mingle into an inescapable pull, one that might cost Angela her life.

Excerpt:
“Are you ready?”
His voice was still soft, emotionless.
“Yes,” she whispered.
Angela looked around the hotel room. It was a basic, cheap room – particle board dresser, large TV on top, a small desk next to it. In the space behind the door was an area designated as the closet. Her clothes hung there. She had locked her gun and ID inside the car, hidden away. On the nightstand sat her work phone – the one that would signal their time together must end if it buzzed.
She glanced back to the mirror over the dresser. Staring back was a person she recognized – physically, that is. It also might just have well been a stranger. She wore a red chemise. The front plunged so low that her breasts nearly spilled out. It was so short barely any of her legs were covered. Underneath she wore nothing.
“Door unlocked?”
“Yes.”
“Kneel.”
Angela went to her knees.
“Blindfold yourself.”
Angela placed the phone on the floor, next to her, covered her eyes with the scarf, tied it securely behind her head. She felt for the phone, put it back to her ear.
“Done.”
“Excuse me?”
“Sorry, done, Mr. Tanner.”
“Now the handcuffs.”
“Mr. Tanner, I cannot…will not be able to pick up the phone to let you know I’ve done that.”
“Just do it. I’ll be there when I decide you’ve had enough time.”
Angela put the phone down, felt for the handcuffs – she had purchased separate ones for use with Mr. Tanner, not wanting to risk even the slightest chance using department-issued ones could lead back to what she was doing. She snapped the cuffs around her left wrist, put her hands behind her back, paused for a few seconds, and then snapped the other cuff around her right wrist.
Oh god.
That was the only thought that formed, mingling with fear and a burning, almost primal sense of anticipation.
Angela wondered what she would look like to Tanner. She was kneeling, but not up on her knees. Instead, her legs were folded under her, her butt resting on her heels. She wasn’t sure if that’s how he meant for her to be, or if she should rise up on her knees, as she did in church as a little girl.
She waited, tiny trembles shaking her body every so often. How long? It seemed as if she had been there seven, eight, maybe even ten minutes, but Angela knew the time was probably much less. Waiting, in the dark, helpless, with a probable killer coming to have his way with her, time seemed to stretch and slow down.
I shouldn’t be here.
The thought stabbed through the haze of desire and mystery and fear, like the sudden emergence of a traffic light in a thick fog.
I need to get out.
Just as her body was about to respond to the thought, to rise up from her kneeling position, she felt lips press against her left thigh; fingers play lightly along her right one.
Oh my god.
She had heard nothing – Tanner, apparently, excelled at stealth as well as he did at understanding how to control her body, her feelings and emotions.
“Please?”
Please what? Please go on? Please take me? Please release me?
“Mr. Tann—”
Fingers pressed against her lips. Not hard, but firmly, enough to silence her.
As quickly as they had pressed against her mouth they were gone, then she felt them again…both of his hands, on her thighs, playing up and down her legs, massaging, caressing, his lips like feather touches across her chest, kissing, tongue licking, playing along her mostly exposed breasts…

Shandra is a mid-western gal who left home at 16 and never looked back. Eventually she made her way to Florida, worked for three years as a carnie and another three with a circus -- yes, a real, live, honest-to-god circus. Traveled all through the South and Mid-Atlantic, town to town, on the road eight months at a time.
Now she’s a small-town office girl, filing papers, making coffee, and dreaming of being free. She doesn’t own a cell phone or a TV, she takes long walks at night, lies in the grass in the day time and watches the clouds go by, and she writes erotica and mystery. Blazing hot erotica, and mystery tales dripping with lust, sex and suspense.
LETHAL OBSESSION is her debut novel. Her short stories PRIVATE DINING and ROOM SERVICE, both part of the TIDES INN EROTIC TALES series; and JENNIFER LOST and JENNIFER BOUND (part of the Ville D'Esclavage TALES) are all available on Amazon.com.

You can follow Shandra at shandramillerwriter.blogspot.com and at https://www.facebook.com/shandra.miller.52  You can connect with her on Twitter at @shandramillerwr