"By the Light of the Moon" 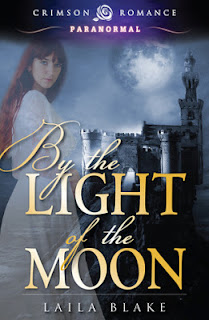 
Withdrawn and with a reputation for her strange, eccentric ways, young Lady Moira Rochmond is old to be unwed. Rumors say, she has been seen barefoot in the orchard, is awake all night in moon-struck rambles and sleeps all day. Some will even claim her ghostly pallor and aloof manner are signs of illness, of a curse or insanity.
The hopes of the peaceful succession to her father’s fief lie in an advantageous marriage. Moira, however, has a hard time attracting suitors. When one does show interest, her family pushes for a decision.
Almost resigned to the fact that she has no choice but to play the part she has been given in life, Moira is faced with Owain. A member of the mysterious Blaidyn creatures and a new guard in her father’s castle, specifically tasked to keep her safe. He is different from other people she knows and when one night under the full moon, she makes the acquaintance of the wolf who shares Owain’s soul, she starts to trust him and seek his presence. As he becomes one of the few individuals who doesn’t make her want to hide and retreat, she wants to learn more about him and they grow closer until they share a kiss one night under the moon.
Faced with feelings and desires that overthrow everything she thought she knew about herself, Moira knows non-the-less that they have to be kept utterly secret. However much they try, however, they continue to be drawn to each other until one night, Owain discovers something about Moira that shakes him to core.


A very good start to a series with the possibilities of being GREAT! It’s original, fun and magical. But I found myself lost and confused a few times over throughout the first half of the story. It did gradually all come together. I felt it just took a little longer than necessary to get there. All in all a definite escape worthy read that many fans of the genre will fully enjoy!

Moira is a free spirited young woman that enjoys being out and about under the sky, breathing the fresh air that only the outdoors can supply. She finds herself being forced (by her parents) to choose a suitor and settle in her “wild ways”. It’s the last thing she wants. But has no choice in the matter due to the fact she does not desire to displease her parents.

Owain is a Blaidyn, a shifter. One that has lived for a very long time. His normal activity is battle, but he has now taken on a new task with hopes to raise funds and settle for a time. His new task is quite a boring one, no excitement what so ever.  He is to keep guard on the lady Moira. Keep her out of trouble, keep her safe. What he gets from this job is the furthest from what’s expected and the task of protecting the lady is simple and hard at the same time. He finds he has an automatic protectiveness of her and much deeper, feelings. That latter is forbidden grounds. Grounds he has no plans of exploring…

Various surprises are in store for the readers of By the Light of the Moon. A historically set tale of love, fate and how it’s never to be trifle with. I will definitely be reading more from this author in the near future. I really enjoyed being inside her head once the story came together :)

Email ThisBlogThis!Share to TwitterShare to FacebookShare to Pinterest
Labels: A.R. Von DreamZ of Dragons, By the Light of the Moon, Laila Blake, Paranormal Romance, Review, series