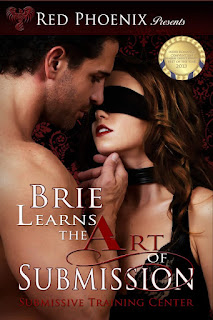 First published as the popular nine-part eBook serial, Brie Learns the Art of Submission is now available as a full-length novel.

Brie's life changes the day Sir comes to her tiny tobacco shop. His invitation to the Submissive Training Center is about to rock this young woman's world. The renowned school is famous for its elite submissive instruction. She has no idea what will be asked of her or the boundaries that will be pushed. One thing is certain: Brie is about to learn more about herself in six weeks than she has over the previous twenty-two years.

From formal classes, hands-on practicums and weekly auctions, Brie will confront her deepest fears and desires. In the process, she will also forge lifelong friendships with fellow submissives and fall for several of the Center's skilled Doms.

As graduation day approaches things begin to unravel, forcing Brie to make an unexpected choice of Master. Which Dom will ultimately earn her devotion and capture Brie's courageous heart?

Warning: This book contains sexually explicit content and scenes that some readers may find objectionable. 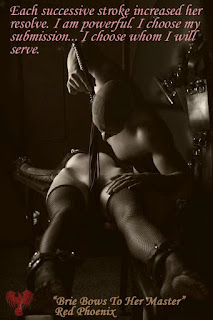 His thrusts were strong and demanding. She had to remind herself to relax in order to take his entirety. She groaned as his speed and depth increased. He grabbed handfuls of her hair, grunting in his own pleasure while his tight pelvic muscles delivered repeated thrusts.
She could feel the burn on her back as they slowly inched across the carpet. It added to the brutish feel of their coupling. She wrapped her legs around his waist and cried out so the whole house could hear. “Rytsar, you’re too big!” she screamed loudly, adding, “But I like it, oh, yes…! You make it hurt so good.” Even though she knew he couldn’t understand, she suspected some of his friends spoke English and it pleased her to promote his manliness to the crowd in the other room.
He grasped her face in his hands and kissed her deeply while he consumed her with his body. The ridge of his shaft rubbed that area deep inside that made her legs quiver uncontrollably. She purred into his mouth as he brought her to the edge, but then he stopped. Rytsar pulled out, chuckling wickedly under his breath.
He turned Brie onto her stomach and grunted out a command she assumed meant ‘stay’. She lay on the carpet, breathless and needy. He came back to her less than a minute later and lay on top of her body with his rigid member between her butt cheeks. He lifted her pelvis up with one hand and pressed his lubricated cock against her ass.

Get your Brie HERE 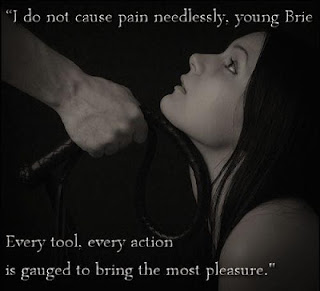 For Marquis Gray: Marquis knows the power of pain in the right doses, and the right settings.
Something For the Pain Red Light King

For Tono Nosaka: Tono loves Brie, but his is a gentle love.
ChasingCars by Snow Patrol

For Falean: Faelan knows Brie is meant for him. He will do whatever it takes to make her his.
You are Mine by Mute Math

For Sir: As Headmaster, he is forced to abide by the rules of the institution even though he is irresistibly drawn to her.
Spectrum by Zedd

For the Collaring Ceremony: The words speak for themselves – a very heartfelt moment
Falling Slowly by Glen Hansard andMarketa Irglova

At the end: This was suggested by one of my fans after I completed Brie. It matched my mood at the time AND Brie’s heart the moment they got onto the elevator.
Euphoria by Loreen 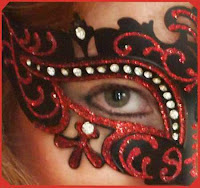 Erotica is a delicious fantasy created to entice both the mind and the body ~Red
Red Phoenix is an award winning indie author who started her writing career in December of 2011. She is best known for her novelette, Brie’s First Day of Submissive Training, which was published in March of 2012. The little book created quite stir when it was released. Since then, fans have been riding the Brie wave with the sociable author. In October 2012, Red published the wildly popular eBook serial into novel form, Brie Learns the Art of Submission. She is currently writing Brie’s continuing journey in the serial titled After Graduation, due out in novel form September 2013.
“I am a happily married woman who believes, based on personal experience, that love conquers all. It is a running theme in my writing.” Red is a mother of three and wife to one. When she is not writing, you can find her on Facebook or Twitter interacting with fans.
“One thing you will notice about my work, I'm all about variety. If a character beseeches me to write his or her story, I willingly give myself over no matter the genre or subject.”
* Red Phoenix has a total of fourteen titles available as eBooks (not including serials.)  Two of her novels are also available in paperback.
Red Phoenix’s Page:   https://www.facebook.com/redphoenix69
Red Phoenix’s Website:  www.redphoenix69.com
Red Phoenix’s Twitter:  @RedPhoenix69 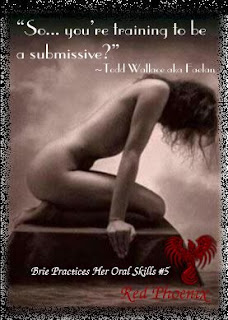 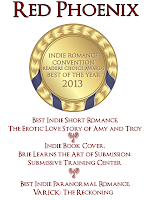