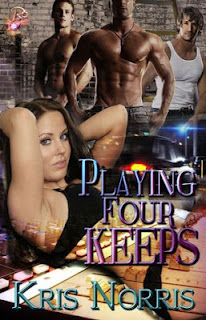 Goodreads Blurb: If two’s company and three’s a crowd, then four is bound to be…deadly.


Special Agent Reese Bailey has a new assignment…one not under the jurisdiction of the federal bureau. She’s been hired to identify the person trying to kill the members of one of the hottest rock bands hitting the charts, and three of the hottest men she’s ever laid eyes on. Keeping her distance would be hard if she wasn’t certain they’d come to the same conclusion as all her past encounters…she’s just too different to make the cut.

Mace, Nash and Landon aren’t sure what to think of the incredibly smart federal agent who walks into their life, and into their hearts, they only know she’s the one they’ve been waiting for. It’s clear she’s a professional, not to mention a child protégé who can read their body language while figuring projectile paths in her head. And she’s not one to mix duty with pleasure.

But they aren’t taking no for an answer, not when their souls are on the line. Reese proves to be everything they've ever imagined and more. But the stakes are higher than any of them realize and if she can’t track down the stalker in time, the boys won’t be the only ones playing for keeps.

Nash, Mace and Landon are part of a hot popular band that have lived through a very traumatic experience and have changed drastically because of it. Reese is a single woman with a spine of steel; a heart just as strong and determined that has also recently been through a traumatic experience. She has been unable to work for some time due to an injury obtained on the job. She's asked to help out to solve and protect Trinity from an "admirer". Little do they all know what fate has in store for them all as they all embark on a mysterious adventure to solve the who of the person(s) behind many attempts to kill the Trinity.
A definite must read for all erotic fans out there ;)