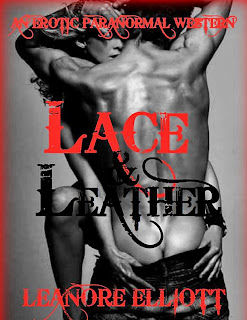 A Hot Ride Through The Wild Frontier…
Jess (Leather) was on a bloody trail to track down his father's savage killers. A woman unlike any he’d ever known before, seems to appear out of the blue and captures his attention. But is she his to keep? Will he give her up to have his revenge?

My Review: A fun time of past meeting present. So full of excitement, humor and heat it was hard to put down! There were so many lines that had me laughing but one of my favorite is "John freakin' who?" Which is what Jess (aka Leather) asks Lacey when she compares him to John Wayne.

Jess is a hardcore cowboy (even though he denies it) that is hell bent on revenge for the murder of his father. Along the way of tracking down the murderers he spots Lacey right in the path of his horse and snatches her up with him on a spur of the moment decision. Once he has Lacey in his life he becomes side tracked (at first without realizing it) because of how drawn he is to her. This feeling is unfamiliar to him for he's never experienced anything like it before.

Lacey is a modern day woman full of spunk and sharp wit. She cannot believe how easy it is to even just look at the hunk of a cowboy before her, nor does she want to stop! She also finds herself with feelings she's never experienced before for the hunk of a cowboy named Jess.

Together they go back and forth to each other’s time. Fear of losing one another runs deep for both of them because the time travel unpredictable. But the time they have together is very well spent in each other’s arms and hearts.