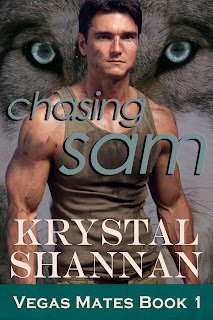 Blurb: Samantha Demakis doesn’t want a mate right now. Her birth-rite and family obligations to her status as the first daughter of a noble family beg to differ. In fact, even her wolf seems to be against her. When a chance encounter reveals the man who might just be a perfect fit, will she run? Or will she fight?

Chase Michaels has been alone for seventy-five years. He’s fought in Vietnam, the Persian Gulf, and Afghanistan in the US Army. Somewhat resigned to never finding his true mate, he is shocked when his wolf reacts so strongly to a woman he runs into in the airport. Unprepared for the politics and snobbery of the noble families, Chase finds himself fighting in a different type of war —a war for the heart of a woman he knows should be his.


A lot of things are chasing Sam, but who or what will catch her in the end?

My Review: An amazing start to a new series that is action packed, fun, romantic and manages to both satisfy while it leaves you wanting much more. I love Krystal’s writing style, her characters and her story telling skills. They are all very hot, addictive and detailed to the point they are perfect visions in your mind. Any fan of the paranormal romance genre will fall in love with Chasing Sam again and again!

What’s a gal to do when she has her life all planned out, perfectly mapped when suddenly out of the blue she meets her mate who is unacceptable because she is part of royalty and he is not? Fight for what she knows is right and what she believes in. This proves extremely difficult when her parents interfere and make it so the chances of being with her mate become very slim. It’s a screwed up tradition that their level of royalty hold a hunt once she’s at the age of 25, the winner gets to claim the female as his mate. Now she must watch the male that is her mate challenge others to win his chance to be with with her. We all know how fate works when someone tries to interfere… Yea, fate gets pissed off!

I look forward to seeing where Krystal will go next in the series. With an ending like the one we have here, patience is definitely a virtue. I want more! Please :)