Review A Touch Too Much by Chris Lange

"A Touch Too Much" 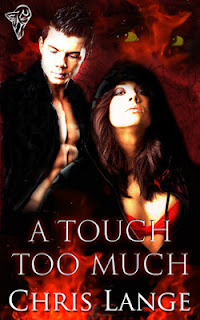 Goodreads Blurb: She shall bring death to the race of vampires.

If prophecies are to be trusted, Liv possesses the means to destroy creatures of the night. But in the real world vampires don't exist. At least not until one of them scents her. And pursues her.

As she flees to save her life, she feels the power in her blood. The power that might eradicate a world of violence and darkness. The power that enchains her to the most ruthless vampire of all.

My Review: HOT! This is the type of read that is so intensely sensual it gives you tingles in all of the right places. So intense, mysterious and shocking that you’ll find it very hard to put down (I read it in one sitting) and even harder to stop thinking about when you reach the end. It still lingers in my mind and it’s been weeks since I read it! A definite TBR MUST for any fans of the genre!

Liv is real. What I mean by that is she is a character that we all can relate with. She shows strength, weakness, just as any normal everyday person would. She’s beautiful and very accepting of all she’s discovered. She lived a pretty normal life, that’s until she meets Rogan and is introduced in to a whole new world and a fab hot tub…

Rogan is an amazingly hot alpha vampire that is one of the most drool worthy specimen I’ve met in quite some time. There’s much many know about him and there’s much many do not. Getting to know him was sure a lot of fun! He’s full of sensual surprises and a protective streak that many crave to have as their own. I want my very own Rogan to protect me :)

Chris Lange writes in a way that teases and tantalizes the imagination. She creates very lovable characters, realistic and vivid descriptions, all which allow for the very best picture to form in your mind. I LOVED the chemistry and build between the two main characters and am very happy with the way everything turned out in the end. Now, my question is… Are there any plans for more? A Touch Too Much part deuce maybe? I’d get it and gobble it up in a blink ;)