Spotlight What the Body Needs by Laura Oliva 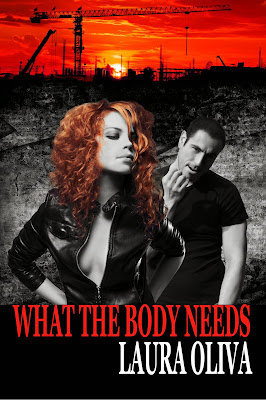 Blurb:
Jak O'Mara is a survivor.

For the last five years, she's tried to convince everyone -including herself- she's no victim.  But with the apparent return of her unknown assailant, the life she's rebuilt crumbles overnight.

Ex-cop Marcus Cutter has his own scars, they just don't show.  Following the violent death of his younger sister, he fled his old life in disgrace.  After almost six years, "rock-bottom" feels a lot like home.

As Jak's new bodyguard, Marcus is forced to return to the city -and the memories- he's tried to forget.  All he wants is to do his job, but Jak isn't what he expects.  When he's with her, he finally feels something besides pain.

When the danger escalates, Jak decides it's time to take matters into her own hands. She's determined to find who's after her, no matter the cost.  Marcus knows he has to protect the woman who's made his life mean something again.  But how do you protect someone who's convinced they have nothing left to lose?

WHAT THE BODY NEEDS, BY LAURA OLIVA- EXCERPT

Marcus pulled off the road onto a barren patch of gravel and killed the engine.  Jak tugged off her helmet and leaned forward.  "What are we doing?"
"Reconnoitering."  He pointed at a squat, nondescript building half a block down the street.  "That's the Vagos clubhouse.  I have someone meeting us there.  A confidential informant from when I was back on the force."  He paused.  "He'll talk us in.  The rest is up to us."
Jak shook the tightness out of her legs.  "Why is he helping?"
"He owes me a favor.  Let's just leave it at that."  Marcus swung off the bike and opened one of the studded saddlebags.  He pulled out a black leather vest and tossed it to Jak.
She turned it over, traced a finger over the lettering on the back.  "What's this?"
"A property patch."
She looked at him blankly.
"To show the others you belong to me."
Her eyes hardened.  "I'm not wearing that."
Marcus sighed.  "Listen, it'll be safer if you-"
"Fuck 'safer'.  I told you, I'm not wearing it.  I mean, Jesus, why don't you just brand me and get it over with?"
A tic started in his jaw.  "Damn it, I agreed to help you.  But my first job is to keep you safe, so if we do this, we're doing it my way." His voice dropped.  "The one-percenters aren't exactly known for being kind to women.  Now shut up, and put on the fucking patch."
Jak glared at him.  He glared back.  Finally, she snatched the vest and yanked it on over her jacket.  He nodded.  "Now get off."
Her eyes popped.  "What?  Why?  What are we-"
Marcus sat down and patted the seat in front of him.  "Might as well make an entrance."
Jak shifted.  "How do I...?"
He took her wrist and drew her forward.  "Like this."  He turned her so she was facing him.  "Sit down."
Jak straddled the bike.  Her cheeks heated.  Marcus shifted.  "Now scoot forward."
She stared.  "You've got to be kidding."
He snaked a hand around her waist.  She felt it straight to her core.  His hand slid lower.  Before she could react, he hauled her flush against him.
Jak couldn't breathe.  Every nerve ending was painfully, electrically aware of how close they were.  Of him.  She stared at the cars on the street, at the chipped facade of the taco truck, at the faded traffic lines in the pavement.  Anything to avoid his eyes.
"Hey."
She didn't look at him.  "Yeah?"
He set his thumb under her chin and forced her to meet his gaze.  "They have to think you're with me.  Can you sell it?"
Jak nodded stiffly.  "I can sell it."
Marcus studied her for a moment.  She willed herself not to look away.  Just when she was ready to fidget, he kissed her.
She jolted.  His lips were coaxing, but firm.  One hand settled at the nape of her neck, held her still for him to sample as he wished.  His teeth grazed her lower lip.  Jak groaned, and let herself sink a little deeper.
A sound of approval rumbled through him.  He teased his tongue against hers.  Something inside her quaked.  An unfamiliar need throbbed deep inside her.  She shifted closer, unsure what she wanted, only aware it was growing increasingly urgent.  She explored the harsh line of his jaw with her fingers, fascinated at the flex of muscles and tendons just under his skin.
He stilled, and she looked down.  Her hips had been grinding against an unmistakable bulge in his pants.  Abruptly, he pulled back.
Jak stared up at him, the sudden loss of heat jarring.  His breath sounded shallow.  Every plane of his face was stark, cold.  She must have paled, because his expression softened.  He brushed a stray curl out of her eyes.  "Yeah."  His voice was raspy.  "You can sell it."

When not sweating blood over the keyboard, Laura Oliva is a full-time mom, wife, amateur chef, gardener, and (non)recovering clotheshorse.  She discovered her love of storytelling as a child, after successfully blaming a broken vase on her younger brother.
A functioning cynic, she writes tender love stories about tough people.  When not working, you can find her enjoying a stiff drink or scrounging through a back cupboard for chocolate.  Laura lives in Northern California with her young son and her remarkably patient husband.