Official Tour Destined for Something by Angus H. Day

In the last year of mandatory school each soon to be graduate takes a multitude of tests to
efficiently funnel them into the right career. Personality profiles showing you to be low IQ, bigoted and prone to senseless violence really increase your chances of being denied. Scores mean enough to tempt test takers to cheat using answer sets bought from sketchy characters. You don't always get what you pay for as Felix Dernoft discovers in Destined for...Something, a Next You novel. 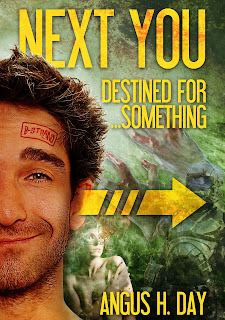 We arrived at level four meeting the movers at residence four seventy three just emerging from their cargo platform.  They were not to begin until we removed the official.  I opened the hard case and issued us our doses of High-Perc that would last for ten minutes.  As soon as we armored and armed we each inhaled slowing down time.  I crashed through the door first while simultaneously Lionel vaulted me stunning the official and his wife.  And his daughter.  And his grandmother.  And his male sex worker dressed in a thong made of barb wire.  Yea, that seemed to be everyone.

I looked up from the floor to see a man at least ten kilos bigger than me yelling at us as the fog from the High-Perc left.  "You dumb asses hit the wrong place.  The official and his wife live at four seventy four."  That registered and Lionel grabbed me up off the ground from my left shoulder as we rushed to use the last of the High-Perc to take out four seventy four.  I had just enough left to get me through the door and Lionel didn't show boat this time, one stun per target and only two.  Fuck me.

The big guy came in smiling "You guys are lucky.  That was the Chairman of the Community Ethics Committee.  He won't be pressing any charges.  As soon as the meat bags are gone we'll do our thing."  He kept smiling as he raised his wrist and tapped at the watch he wore.

Lionel ran out and backed the armored car to the front door.  I mag clamped both their hands and tossed them in the back.  I asked "Was that quick enough for you zipper head?"  Turning to the noise of Lionel slamming the back door I caught the giant's fist on the left side of my face and luckily the wall stopped my flight.  Somehow I got in the passenger seat and we were moving.

Lionel "What the fuck is your problem?  We got to work with these guys."

I didn't know what my problem was so I kept silent and he glared at me until he needed to maneuver the car through tight corridors.  The drop was in sub level fourteen and the only requirement was that it not be within two hundred meters of an elevator or stairs.  We reached the level and he found a large enough old construction staging area to get up to ten kilometers per hour, I triggered the hatch to flip up as he turned the car a one eighty and stopped abruptly.  The sound of stuff rolling out onto the concrete was all we heard.  I closed the hatch and remote released the mag-clamps as we pulled away.  Looking in the side mirror I saw the woman attempt to get up and move to her husband as the first Ravenarous launched from the shadows tearing a big enough chunk out of her chest that from fifty meters I could see the fountain of blood. 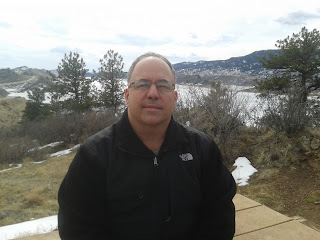 AUTHOR BIO
I live in Fort Collins Colorado with my wife and son. My daughter has embarked on her career as a graphics designer. I've been an Infantryman, Swine Farmer, smattering of other trades and jobs and now I'm a manufacturing pharmaceutical chemist. What aspect of my life that is devoted to fitness favors swimming in open water which means I spend most of the year working out in a pool then hit the lakes when it warms up a bit. My wife Cheryl safety kayaks for me when we manage to make it work. One day when I was waiting on everybody else in the house to get off of the computer when it hit me. Start doing what I had wanted to do for the last thirty years, write science fiction stories. I've read extensively, experienced way more than a person is entitled to and I am a scientist. That being said, sometimes I just pull them out of my ass. The ability to picture a scene in my head helps, once I stop laughing uncontrollably for no reason. 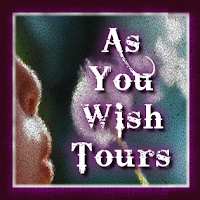