The Vikings are back in Week 10/Chapter 10 of Silver and Spice by Maria MacAuley! 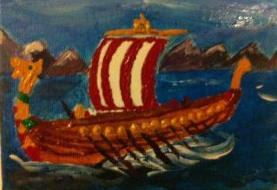 Twelve years since Aisling left. Eleven years planning his revenge. The deed was done. He had finished the bitch as she tried to protect her son. They were travelling with other pilgrims to Clonmacnoise, and foolishly, they had believed that God would protect them.  It had been ridiculously easy to ambush the group; none of the monks or priests had thought to carry weapons.  Despite the dull colour and shapeless nature of her cloak and kirtle, Aisling’s beauty shone through. The lad had her striking auburn hair, but his grey eyes could not conceal the fact that Kerik Halsrason was his sire. She had recognised her husband, and Peter knew it. It did not matter now. She was dead and the child was as good as gone. It was time to celebrate with his true son.  He did not care for any bastard children of the field hands. Sean was finally becoming a man following in his father's own image and actions.  Peter’s face contorted into a twisted smile, proud of the corruption of his son’s gentle nature.  That was almost a month ago.
“What are you thinking of, Peter?”  The woman in his bed playfully danced her fingers over his shoulders before burying them in his already matted chest hair. He snorted, and forced his knee between her thighs, before rolling over and grinding roughly into her, his still-black hair swinging over his face with each coarse thrust. Spilling his seed, he knelt up, panting and grunting.
He ran a filthy ridged fingernail down her over her breast. The woman of many secrets had arrived again in Dubh Linn a fortnight ago, this time with several young men almost half her age.
'What brings you here this season, Valkryie?'
'My fosterlings need to see life outside the north. Since men no longer go a-Viking, they need to learn of life beyond fishing and farming.'
'And what else do they learn of at your hands?' He smirked.
'Discipline. Bedsport.  To make a success of their lives.' The second sons of Jarls had a different path in life, much more fluid than that of their elder brothers. She had been a foster mother for the past seven years, and prepared her foster sons well for adulthood.  Jarls appreciated her taking these boys of twelve summers and turning them into men over the seasons, returning them to their families by the time they reached ten-and-seven.
She was waiting for her next fosterling. Kerik Halsrason made a concubine of her younger sister, Gertrude, a life of comfort and plenty that should have been hers.  To add insult to injury he had taken an Irish woman too; as if he had his own personal harem like those in Miklagard, or Constantinople, to those who lived there. Thirteen summers and the bitterness at his rejection had not softened. She could not foster his first born, but she would take very good care of his much-loved second boy. Kristr.  There had been discussion around the Dubh Linn settlement that he and his mother had been in Ireland, accompanied by Kerik to attend one of their ridiculous Christian pilgrimages when she had been ambushed and killed. She wished it had been Gertrude who died, lying and bleeding to death with a sword through her heart.
His grating voice broke her fantasy. 'Perhaps you could take my son into your foster care? He still has a lot to learn. Discipline and respect have been managed most effectively by me, and he already is showing the skills of a fine merchant and trader. Perhaps bedsport could be taught by you? He has passed ten-and-six summers and I know he has not lain with a woman.' He idly picked the grime from his dirty nails as he casually discussed his son’s lack of experience with women.
She sat up on the bed and reached for her linen shift. 'No. I only foster pure Viking sons. Occasionally a clever half-breed will be welcomed.' She had one in her care at the moment, a quiet, reflective boy, Johan O’Toole.  He was the offspring of an Irish sire and Norse mother.  Johann listened to all around him, yet gave away nothing. She was teaching him to travel between the worlds of his parents, inconspicuous in either society yet able to garner information from both. When Halsrason's boy arrived, that would be two. Enough mixed blood for anyone.
She stood up from the bed and washed her face and hands in a basin of water. 'Bring your son to me on the morrow.' She dried herself with a linen cloth, and with a regal flourish threw it aside. 'Shall we see if he shares his father's tastes?'
He scraped his greasy hair back into a leather tie, and gave a mock bow. 'As you wish, Alfhilde.' 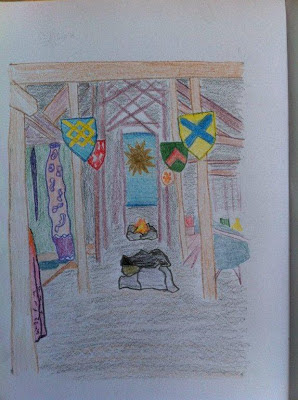 Marthe could barely conceal her delight at the transformation of Roisin, with her mother's help. This pair was not going to make a suitable match without her assistance.
As the three young women entered the hall, led by Gertrude, Marthe heard the appreciative murmurs of the assembly. She looked up to see Kristr's grey eyes staring down the hall in appreciation at Roisin.  Marthe dipped her head, knowing she could barely keep her satisfied smirk to herself as she watched her brother from the corner of eye.  He stood to allow Roisin access to the bench, his hand brushing against the small of her back as she sought her balance on the narrow seat.
Marthe squeezed herself in on the other side of her brother, and started to pick at her food, but she was more interested in the conversation going on next to her.

Roisin spoke shyly to Kristr. 'Marthe and your mother washed me, and dressed my hair in a Norse style. Do you like it?'
He smoothed his hands over the waves. 'I like it very much. It is exquisite bound or loose.'

Marthe silently agreed with her brother.  Roisin’s hair was beautiful. If she were his wife, she would be required to cover it, a married woman's husband being the only person allowed to see her hair unbound, her head uncovered.  And Kristr would make a good husband, deserving of such a beauty.
As the meal progressed, and the conversation moved around the table, Marthe whispered to Kristr. 'Brother, I need your help.' He narrowed his eyes in amusement. If there was one woman on the Halsrason steading who did not need help, it was Marthe, the Maker of Mischief. He decided to humour her.
'Help? How can I be of assistance, you seemingly helpless daughter of Loki?'
She smirked at his friendly sarcasm. 'As you know, Roisin is learning our language. I need to say something to her in her own tongue, and you can translate for me.'
'What do you want to say to her?'
'I want her to know she can trust me. Give me the words for "Trust me".'
'Sister, I do not know of what you scheme, but the words you seek are: "Chur do mhuinin ionam".' Put your trust in me. Kristr knew his sister was plotting, no doubt his match with Roisin, but with a kiss on the cheek and a thank you, she repeated the words and bounced off. He caught Erik's eye and shook his head. Erik shrugged, obviously not part of Marthe's current endeavours. Kristr knew Marthe and knew that whatever she had planned for him, Erik's fate would not be far behind in their sister's meddlesome ways.
Marthe’s interfering aside; he knew that he wanted to be a husband. When he spoke with Flynn and took her to see her father, he would ask permission.

As the meal came to an end, Roisin gave a small yawn, and immediately Marthe was by her side. 'Kristr, Roisin is tired. Tell her that I will take her and help her a-bed.' She turned to Roisin, and back to Kristr smiling sweetly.
He gave an exaggerated sigh. 'Roisin, Sweetling, Marthe feels that you are tired this eve and she has offered to help you to your chamber. Do you wish her to assist you?'
Roisin looked to Marthe who nodded excitedly. 'Oh, I am a little sleepy this evening Kristr, but do you promise to come in and wish me good night before you retire?'
'Of course. I will not be long' He kissed her cheek. He wanted to wish her much more than a good night.
Roisin could not understand Marthe's enthusiasm for helping another woman to bed. As they entered Kristr's hall, she lit a taper from the smouldering hearth and lit a lamp as they went into Roisin's chamber. Marthe lit three more lamps within the room, bathing it in warm flickering light. She helped Roisin undress, not tolerating the smaller woman's reluctance at the removal of her thin linen shift.   As she covered Roisin with a soft seal fur for warmth and modesty, Roisin frowned as she heard Marthe speak in her own tongue. 'Put your trust in me.' Why would she say that?
'Ja.' Roisin answered in Norse, confused.
Marthe squealed, jumped on top of her and looping a strip of linen around one of Roisin's wrists, then the other, she bound her hands, securing her to the slats of the wooden bed frame. Roisin twisted in outrage at her predicament, the fur slipping off her nude body, whilst Marthe smiled in approval. She placed a finger on Roisin's lips. 'Put your trust in me,' Marthe whispered again as she rearranged the fur to protect Roisin's modesty. She gave her a kiss on the cheek and waved good night.

oooOOOooo
Roisin was left alone, thoughts of Marthe's mischief spinning through her head.  How foolish and naive she had been to be so easily overpowered by the younger, but much taller woman. What was Kristr going to say when he saw her like this?  He said that he would come in to bid her good-night, and he would release her.  Or would he?  She recalled their earlier embrace in the woods, and blushed as she realised Marthe’s plan. 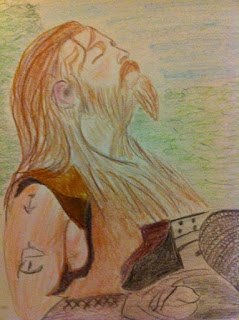 Thanks go to: For all pictures, E. Paterson, 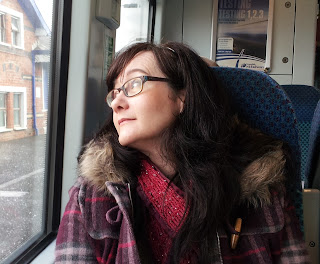