NOW AVAILABLE in paperback ~A Touch Too Much by Chris Lange~ 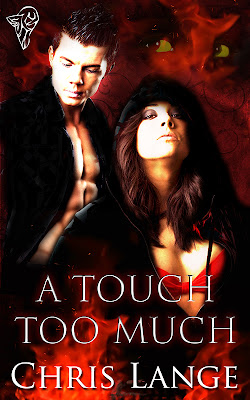 BLURB:
She shall bring death to the race of vampires.
If prophecies are to be trusted, Liv possesses the means to destroy creatures of the night. But in the real world vampires don't exist. At least not until one of them scents her. And pursues her.
As she flees to save her life, she feels the power in her blood. The power that might eradicate a world of violence and darkness. The power that enchains her to the most ruthless vampire of all.


She never saw him coming. Liv was opening the trunk of her car when a rough hand grabbed her throat and squeezed. Her heart stuttered wildly, and her lungs cried for air. The hand tightened its grip, just enough to control her, to let her know she couldn’t escape. The parking lot looked deserted. At this time of night, even late shoppers had already gone home. There was no one to help her.
She tried to breathe, tried not to panic. Little dots danced before her eyes. A sudden wave of blackness threatened to engulf her. She fought it. But the hand felt strong, very strong. Suddenly weak, unable to think, Liv dropped her bag. It clattered noisily on the concrete, the only sound in the vast silence of the parking lot. Then…he smelt her. Definitely smelt her.
As suddenly as she had been attacked, she was free. She inhaled deeply, sweet air, blissful air invading her empty lungs. She made ragged sounds, her throat burning, her knees so wobbly that she had to lean on the car to ease off the tension. Silly as it sounded, she felt as weak as a freshly-out-of-the-womb kitten. What had just happened? Had he really smelt her?
“Go!”
His voice startled her—only one word, barely whispered, but an order nonetheless. He had assaulted her, out of nowhere. Now he wanted her to leave. The whole scene felt totally surreal.
“Go before he sees you!”
“Who?”
“Some questions are better not answered.”
He spoke in a low tone as though he didn’t want to be heard. Liv turned around as fast as her still-spinning head would allow her. He stood well away from her, dark, tall, dangerous, his gaze fixed on her. The most attractive man she had ever seen. He had just attempted to strangle her but, looking at him, all she wanted to do was run her fingers through his thick black hair, and touch the hard lines of his face.
Her granddad’s favourite curse sprang to mind, as was the case every time she felt troubled or threatened. Holy mackerel, what was wrong with her today? She should already be driving away yet shock seemed to slow her down to the speed of a sleepy hedgehog. Shock or curiosity? Latching onto the mental image of Gramps, she stared at her handsome, disturbing attacker.
“You can’t jump on people like that. What do you want?”
She carefully touched her neck, the tender spot right below the chin. Despite her fear and bafflement, Liv couldn’t help gaping at him. Who was this man? What did he want to do with her? Rape her? Kill her? If so, he wasn’t being very efficient. Why had he changed his mind? Because he had smelt her skin? That made no sense. No sense at all.
“Look, I don’t know…”
“Be quiet!”
He had issued an order again, and, in spite of his scary tone, she didn’t like it one bit. They faced each other, her still wobbly on her legs, him as hard as iron. She decided not to be impressed by his unnatural gaze and stance, and took a step towards him.
“Stay away from me!” He didn’t move a muscle, didn’t raise his voice. A gust of wind crossed the parking lot, and his long, black leather coat billowed. A dog’s distant howl broke the silence, the sinister sound suggesting loneliness. Liv felt hit by an unexpected lick of desire as she watched the mysterious stranger—a gentle hardening in her stomach, a soft tickle between her thighs.
Although night had settled in, she easily made out his rough features, the strong line of his jaws, the curve of his sensual lips. What could those lips do to her? Slide along her bare skin? Caress her mouth with longing? Kiss the gentle throbbing between her thighs?
Holy mackerel, what was she thinking? She had to quit daydreaming right this instant. For all she knew the man might be the next Jack the Ripper so she’d better stop drooling over him. Yes, good decision.
Maybe she spent too much time in front of the television, but he looked so like a dark knight from past ages, a guardian from a world beyond. Intent on clarifying the situation, Liv took another step.
“I told you to stay away from me!”
There it was again. Did she detect a hint of wariness in his tone this time?
Palms up, she met his gaze. “Why?”
“Because you are the death of me.”