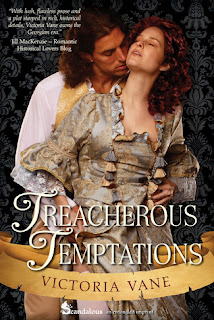 Goodreads Blurb:
A reluctant heiress resigned to her fate… Mary Elizabeth Edwardes has one of the largest fortunes in England, but has no desire to leave her quiet country existence… and even less to acquire a husband she cannot choose for herself.


A dissolute nobleman bent on retribution… Trapped in a duplicitous existence since scandal destroyed his fortune and family name, Lord Hadley Blanchard has spent the better part of a decade posing as a disaffected exile while spying and seducing in the service of the English Crown.

A dangerous game of seduction, and intrigue… When summoned from abroad by a former lover, Lord Hadley perceives an opportunity for vengeance at last. By employing the full measure of his seductive charm, he woos the ward of the man who destroyed his life, little knowing that winning Mary's fortune will mean risking his own treacherous heart.


Yes, this story was definitely packed full of treachery. So much so I found myself actually getting angry with those deceitful characters (grr). Having read all of Victoria’s works (and always being satisfied), this book, her first full length novel, did not change that trend for me. Treacherous Temptation is a story that any fans of the genre will enjoy the build, overall satisfaction and escape with :)

Mary’s fathers’ passing is the worst thing that could have ever happen in her life. Besides losing a very close loved one, she must now change her way of life to appease what is expected of women in this time and to appease her father’s wishes. Now she finds herself in a new world. One never ventured, never traveled by her. She must also find and marry a man so she can go back home, the only place she wants to be. But could she marry someone she cares nothing about?

Hadley’s story is a strange one. His life has been a series of shocks and deceit. Actually, it’s most of what he knows and it trying to repair. But most of the repairs to his livelihood that are needed require the funds to do so. Now to find them without having to owe debt or bare some other extreme circumstance on his already burdened life…

Historical romance really gives a completely different feel compared to modern day reads of many genres. It’s an experience in itself that I find when very well written (like this story is), it’s an adventure not to be missed. One for both full-fledged and partial fans of the genre. This is some journey, one that some might give up on due to what goes on in the background and some of the forefront. But hold on tight. We do get a HEA, one I was quite satisfied with am sure you will be as well.