Review After the Storm by Claudy Conn 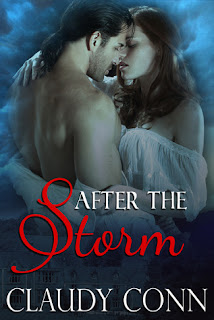 Goodreads Blurb:
No matter what her family and friends say, Jenny knows she will never fall in love again. How can she, when her childhood sweetheart was one of the countless killed at Waterloo?

So when the Earl of Danfield proposes a marriage of convenience, it seems the perfect solution. He will secure his inheritance, and she will be spared the necessity of being paraded in society, forced to dance and flirt and do all the things her broken heart cannot do. His proposal will give her what she wants most. Peace.

But peace is the last thing she finds in her marriage. Her growing attraction to the earl brings with it guilt that she’s betraying her beloved Johnny. Her mother-in-law considers her an interloper. Her husband’s former lover makes it clear she doesn’t want it to be former. And when a supposed prank nearly kills her, Jenny has to wonder—now that the earl’s inheritance is assured, has she become an inconvenience to be eliminated?


Anyone that knows my reading preferences knows I’m not a huge fan of historical. Actually Claudy is now the third author I find myself being pulled to in this genre. After the Storm is a sweet, touching, romantic, mysterious and fun read that all fans of the genre will definitely enjoy. Actually, I find I can say that even readers that are NOT fans of the genre will enjoy it :)

Jenny’s story is a sad one. She lost her best friend and fiancée to battle and has not recovered from it. She swears she will NEVER love again is incapable of it is what she believes for she is still in love with John. But now she is given no choice but to move on. Her father and aunt have put her in the situation that she must face the world, meet many suitable suitors and choose a husband. Jenny is dreading it. She does not any to move forward. She does not want to get married and she most certainly does not want to try to love again. When the Earl approaches her with a proposal of a marriage solely of convenience, she’s not sure. It does give her an out from having to go through the hustle and bustle of meeting other suitors. But will she be able to let go of the guilt she holds for her beloved?

Love the build, characters, setting and EVERYTHING in this story. Claudy Conn is now another who has gained me as a fan of her historical romance. That totals three now. I do love the different feel the time frame and dialect feed to my imagination while reading. Great job Claudy! Bravo!!