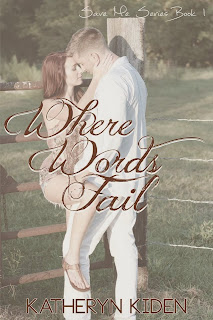 Abby Irons has it all together.She has a life everyone envies. She’s the frontman for the band Thirty Ought Six and co-owns Ironsound Records with her twin brother Alex. A girl with the world at her feet so young must be happy.
Except everything is tainted by a past that won't stop coming up. A present that is falling apart everywhere but onstage, and a future that shes not so sure about.
Deceased parents, a sick brother, a six year old niece with no mother and a band and business to keep going while everything is falling apart.
When her lead guitarist Derek admits himself into rehab for a drug problem will his replacement cause more problems than he fixes?
Jameson Williams lost the love of his life because of an addict father.He won't keep a woman around for more than a night because of it and hasn't had much of a life since he got out of the Marines. His older brother pushes him audition for a temporary guitar position for a major band and make something out of himself. When he gets it he’s more than excited...Until he reaches the tour bus and meets the band.
Will his past bite him and ruin any chance of a future?
Money,fame,love and life are all up in the air.

I love it when the title of a book truly fits the actual story! Where Words Fail is an emotional, fun, touching and addictive read that many fans of the genre will enjoy their time reading.

Abby has been through a lot in her life. Add the loss of her parents and being picked on and pretty much harassed forever just for looking and being different, and yea, it's much worse...
Abby's had to calm her temper and basically just sit back and swallow her retorts and actions because she's been firmly warned and she DOES NOT want to face the consequences! Luckily (in some way) life takes a turn for her and she does not have to deal with those foolish people any longer, at least not alone. Yea she still has many things that are causing her to suffer emotionally. But the show that is life must go on!
Now if she can only get rid of these gorgeous pair of eyes that she fell in love with and have haunted her for years, she'll be able to move forward and she'll be all aces!

I enjoy a story when a couple is reunited. Especially two people that are both...damaged in some way and it eventually leads to both being able to heal one another and cure the aches each carry.
Jameson is a great male who was put into a situation by family. Luckily he and Abby get a second chance to make everything right...
Where Words Fail is a great start to a new series! I look forward to Tuesday story (sits on edge of seat tapping feet!) I hope it releases soon!

Motherfuckers. Just because I’m a freshman doesn’t mean anything. I don’t usually let myself get walked all over, but I just can’t seem to help it. I’m a freshman. Fresh fucking meat and I have to behave myself. It doesn’t help my case that I’m probably the smallest person here, or that I have bright red hair and glasses. Nope that just makes it easier to stomp on me.

The only person I know at this school is my twin brother Alex. But even he doesn’t know how to handle how they treat me. He’s the lucky one out of the two of us. Somehow he got the height and ended up a blonde instead of a goddamn ginger. As a freshman, he already stood five feet nine, and the doctors don’t expect him to stop growing anytime soon. Me... They say I probably won’t make it over five four.

Katheryn Kiden was born in Boothbay Harbor Maine in 1989 and raised in Newcastle. She was raised with four brothers. Katheryn graduated when she was sixteen and has been writing since she was young. When she isn’t attached to a keyboard you can usually find her with her two younger brothers, friends, or with a camera in her hand.