A.R. Von: Are you a morning or night person?
Elizabeth: Morning.

A.R. Von: You were just given a yacht. What would you name it?
Elizabeth: Dead Reckoning

A.R. Von: Most hated chore on the household chore list?
Elizabeth: Cleaning the windows…I hate it and I’m crap at it too.

A.R. Von: Pen or pencil?
Elizabeth: Pen, I’m addicted to stationery, but dislike pencils (except for chart plotting when sailing…)

A.R. Von: Do you like to sing in the shower?
Elizabeth: Yes. I like singing and I adore music.

A.R. Von: What is the best thing you have dressed up as for Halloween?
Elizabeth: I went as myself and won first prize.

A.R. Von: What comes first, Chicken or Egg? (he he)
Elizabeth: I think it’s rude for the chicken or the egg to come first, a woman should always come first.

A.R. Von: Listener or talker?
Elizabeth: I like to think both, but it depends on the circumstances.

A.R. Von: What punctuation mark best describes your personality? Why?
Elizabeth: A question mark because I’m a nosy parker.

A.R. Von: What childish things do you still do as adult?
Elizabeth: Far too many to mention, play on swings is a favourite, snowball fights, build snowmen, kick through autumn leaves, say ‘ner nikki ner ner’ (a lot!) and eat Haribo – (a lot).

A.R. Von: Once, just to attract attention, I...
Elizabeth: …got to my feet in the Bobby Moore stand at a West Ham match (London football club) and shouted very loudly at the referee. Not at all ladylike, but not that shocking I’m afraid. The man sitting next to me said, ‘you look like “cor” and you holler like a fishwife’…That’s the East End girl coming out in me; I’ve hidden her away good and proper so I have missus.

A.R. Von: Can you tell us about some of your current releases, maybe a favorite and if you’re currently working on anything new?
Elizabeth: I’ve just released ‘A Stranger In Capricorn’ which is the second installment of a series in my Short, Provocative Erotica – it’s free until the 15th March (the first part being ‘The Little Red Kilt’) I’m working on the third part, it will eventually be novella length at the very least. I’m also working on ‘Falconworth’ which is the follow up to ‘Her Sugar Daddy’, and will also be novel length and published as work in progress on the Secret Narrative website.

A.R. Von: Thank you so much for chatting with me and sharing a little bit of yourself with us all.
Elizabeth: I’m thrilled to have been asked to share with you and your readers Ava and thank you for thinking of me. I’d like to take this opportunity to wish you all the very best with your own work, which is fabulous.

A Stranger In Capricorn 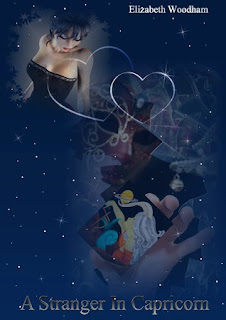 About the Author
Provocative erotica designed to turn you on by Secret Narrative writing as Elizabeth Woodham. Elizabeth lives and works in London, England. Her titles feature engaging, believable characters, and enjoyable storytelling. Always passionate and erotic, sometimes amusing, occasionally harsh, she wishes you as much pleasure reading her stories as she's had creating them.
From the Author
Thank you for your interest in my work, please keep watch at the website for details of work in progress, new releases, and free offers. I welcome your thoughts and views, am eager to hear your opinion and appreciate reviews. Contact me via…

Other titles by Elizabeth Woodham include:

Her Sugar Daddy
When Eleanor is invited to the tea dance ‘Jive like it’s 1945’, she assumes it’s going to be another wasted evening. How wrong could she be? Eleanor meets Matthew, an older man, in fact, much older. Together they set off on a whirlwind adventure where Matthew explores her in a way she’s never previously experienced, and Eleanor discovers her true sexual self.

Kat-Urban Cougar
Dominant and seductive, bisexual Kat Francis is accustomed to acquiring anything she desires. Wealthy and powerful, there are few things she relishes more than predatory sex, deploying bespoke equipment designed to inflict pleasure and pain. Kat indulges her inner cougar, hunting her prey, capture inevitable, satisfying her needs with scant regard for others, who sometimes discover that wishes are better left unfulfilled.
Kat Francis apparently has it all, predatory, rich, and ruthless, she fills her hedonistic lifestyle with erotic adventures uncomplicated by love, but after the marriage of her daughter Mae, to Barrister Scott Masters, Kat awakens to new possibilities.

Lust: It’s a Sin (It’s a Sin: Volume 1)
The first in a series of seven sins. Owen Shaunessy returns to London, England, having emigrated with his family while he was a teenager, rediscovering his youth introduces some familiar faces - along with the unexpected....