Review Two's A Couple, Three's The Law by Eve Langlais 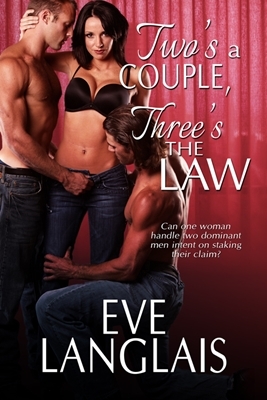 Can one woman handle two dominant men intent on staking their claim?

Two’s a couple, three’s a ménage, not to mention the law. Welcome to an alternate world where the government gives tax breaks to women who choose to take on two or more men—and werewolves live amongst us.

Despite the laws encouraging polygamy, Chloe isn’t interested in a relationship with one man, let alone two. But all that changes when a werewolf client decides he wants her for more than just legal aid. He’s not alone though. Her nemesis in the courtroom, district attorney Anthony Vanderson, is also intent on seduction.

Caught between two men—naked and panting—she succumbs to passion, gets embroiled in a mystery and learns werewolves aren’t the only creatures living amongst humans.

I've read at least 2 dozen of Eve Langlais' works and I've enjoyed each and every single one of them. This time is no different. Two's a Couple, Three's the Law is a different sort of ménage reading experience for me. It was written with class and humor as only this author can and does with all of her work. A great read for all fans of the genre :)

Chloe is in law. Not the gun toting kind, but the lawyer kind. She enjoys her job to a point, but has desires...cravings for more. More success and more...let's just say other things many would not approve of. She's an intelligent woman and knows (mostly) what she wants out of life. One thing is she DOES NOT want a serious relationship.


She's fine with having a friend with occasional benefits. But that's as far as she'll go. She especially does not want a ménage relationship. Her parents have had a successful marriage as a ménage but Chloe feels it's just not her thing. Or it is?

I have to admit while I liked Chloe. There were a few occasions when she got on my nerves, GAWD!
All in all a great read with great characters and a very entertaining story line.