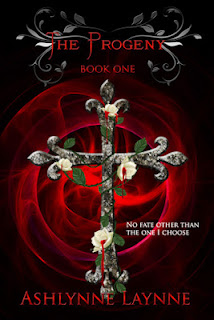 Goodreads Blurb:
“No fate other than the one I choose.” The timeless creed, and tattoo, bore by the Rousseaus— a vampire clan with the purest bloodline of any vampire family. Out of this clandestine group came one who was different, yet the same: Ascher - a half-bloodling— half- human, half vampire.

Ascher questions the purpose for his existence and which world he truly belongs to: the human world or the vampire world. Two months from sealing to Ursula— a prearranged union to a woman he abhors — he’s at his wit’s end. He knows if he calls off the sealing, the Romanian clan will strike with deadly force, but he cannot see eternity with a cold empty shell of a woman like Ursula.

Just when he thought life was complicated enough, he meets Shauna— a beautiful, bi-racial human wiccan — and immediately develops an unshakable attraction to her. She makes him feel alive and vital despite his origins and Ascher makes a decision that turns his immortal world upside down.

My Review:
The Progeny is two firsts for me. The first of an amazing, original exciting, memorable, touching and fun paranormal read and my first time reading anything by Ashlynne Layne. A definite MUST read for any paranormal romance fans out there that enjoy a magical and endearing story.

Ascher is a devastatingly handsome one of a kind male in his world. Not so much ridiculed for being different, but cherished and smothered in some ways. He picks on himself more than any others do. He’s a very special male that finds himself alone no matter the company, incomplete even though he is whole and unhappy even though joy surrounds him. That’s until the day he meets Shauna. Once he sets his eyes on her, his whole existence changes in the very best of ways.

Shauna is another that is a beautiful person inside and out but does not have a sense of belonging anywhere. Being different in anyway makes it hard for her to be accepted by many. On top of that, she’s had a VERY traumatizing past that constantly haunts her. She’s never had a real relationship in any way shape or form, except for with her sister. Their bond is unbreakable and true. When she meets Ascher, he world tilts on its axis and further exploration of why he makes her feel the way she does is in order.

I absolutely LOVE these two together and cannot wait to see what happens next for them and the rest of their family and friends. An amazing group of people (characters) that are so lovable (well except for one or two meanies), that they linger in your mind even days after you’re through reading…