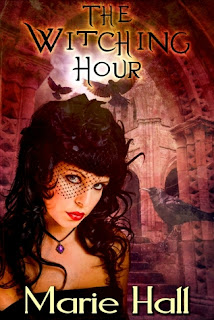 Because sometimes death isn’t the end…

After not only being run over, but watching her husband die in the same hit and run, Eve Philips thought she would never love again. Years pass and her sisters worry that she’ll become an old crone like so many other witches. They’ve made it their personal mission to help her find her next true love. But Eve wants none of that, she throws herself into her potions shop--Witches Brew--determined work, and not a lover, will fix the void in her heart.

Until the day she sees him. Cian, gorgeous and mysterious, she’s frightened by the desires he brings out in her. A passion that rivals even the love she’d felt for her husband.

But Cian is not what he seems. He’s fae. More than that, he’s the grim reaper of legend and his mission means her death. She shouldn’t have seen him. His kind moves in stealth, but the moment her golden eyes meets his he knows his world will never be the same. He’ll defy his orders and his Queen to keep her. But will Eve want what he offers when she discovers the truth? That he was the one who harvested her husband’s soul…


This is an Urban Fantasy Romance dealing with fairies, vampires, shifters, witches, and the occasional vindictive ghost.


My Review: An Excellent paranormal read that held a little of everything for its readers. We’re talking romance, action, sadness & loss, originality, various paranormals, humor, sensuality, surprises, an amazing build and GREAT characters (I fell in love twice!) Any fan of the genre will definitely enjoy their time spent with The Witching Hour J


Eve is one of three sisters. All are beautiful and all are witches. Eve is the only one that has married out of the trio and sadly experienced the loss of her husband at a high point of their relationship. She lives for a couple of years still holding on to the loss, closing herself off to the world. No longer truly living as she should. That is until she meets Cian…

Cian is a fae, also known as a grim reaper. He’s given tasks to accomplish and has no choice but to get them done. He never has a choice, but finds his current task brings him pause. He just CAN’T! There’s something about it that’s preventing him from moving forward and accomplishing what he’s been set out to do. One of them being the most beautiful female he has ever seen, Eve.

An amazing story of fate, peace among all paranormals, choice, free will, a very touching romance and much, much more. While very satisfied with the story, I found myself wanting more of the world and characters Marie created (*hint hint*).