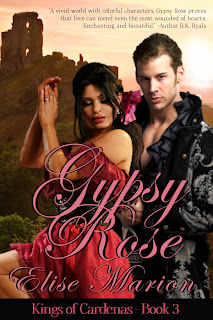 “Unlike the delicate hothouse rose, the Gypsy rose is riddled with thorns. Few men are brave enough to take one in their grasp.”

Tatiana Angelo always dreamed of a life of opulence and glamour. When her cousin became the wife of the King of Cardenas, she was swept away by the intrigue and decadence of palace life and became the jewel of the royal court. Catching the eye of a rich and titled lord seemed like a dream come true, but a few months after their whirlwind elopement, Tatiana found herself abandoned by the man she once thought loved her. Now, all she wishes to do is return to her previous life, one of simplicity and freedom. When Adrian Wilshire enters her life, Tatiana is certain she’s found in him the freedom and passion she desires. Despite the scars left on her heart by her past love, she throws caution to the wind and opens herself to the possibility of a future with him. But when the truth of his identity comes to light, the pain of his betrayal is too much to bear. Yet, despite her anger and sadness, she finds that turning her back on him will be harder than she could have ever imagined.

A few months ago, Adrian Wilshire was nothing more than the illegitimate son of a courtesan and titled lord. After years of hard work, he’s finally saved enough to begin the modest but quiet life he’s always craved, hoping that in doing so he will finally leave the ghosts of his tormented past behind. When he sets eyes on the vivacious Gypsy dancing under the moonlight, Adrian knows that he has finally found the woman that could make his dream of a happy life complete. But the strains of a responsibility he never wanted weigh heavily on him, as the demands of an estate left to him by his father press in on him from all sides. Can he live his life trapped in a gilded cage he despises and still keep the heart of a woman who desires freedom above all else? With his vengeful half-brother bent on destroying everything Adrian has inherited, as well as his life and love, Adrian will find keeping the balance between duty and desire even more complicated.
Can Adrian fight the dangers of the present and the ghosts of the past while claiming the fickle heart of the Gypsy Rose? Can two broken hearts find comfort in each other and lasting love?

Elise Marion's Kings of Cardenas saga continues with a story of heartbreak, passion, deception, and love.

My Review:
Gypsy Rose is the third book in the Kings of Cardenas series. I’ve read each one and have to tell you, I enjoyed each and every one of them! While not a huge fan of the historical genre, Elise’s writing is so flirty, fun and all around wonderful I cannot help but to enjoy it! It can be read as a stand-alone if the reader chooses, but you’ll miss out on some grand adventures and wonderful growth and relationships. This is a story any fans of the genre or even those considering it, will enjoy.

Tatiana is a smart, beautiful woman that now has a tarnished reputation, one she does not deserve. She just wants to be what she once was, what she was born to be, a free spirit. No man would allow such a thing. Not with the ways they live. Well that’s what she thought until the day she met Adrian. From that day forward, her life takes a new path and she likes the way it leads!

Adrian has recently gained a new status and wealth and responsibilities along with it. All he’s never thought possible for him. He’s not looking for anything or anyone. He’s just living, doing what he enjoys and taking care of all that is needed. His desires change the evening he lays his eyes on the beautiful gypsy. His destiny…

Together these two destined soul mates help one another and complete each other like no other. I thought this would be the last of the series, but it looks as if there’s to be more coming our way (YAY!) I look forward to seeing what Elise has in store for us next :)