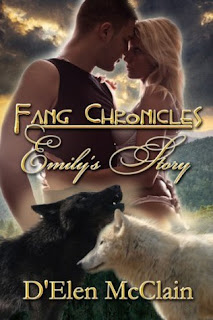 Goodreads Blurb:
After a werewolf savagely rapes Carolynn, she hides her tormented secret below the basement stairs for nineteen years.

Emily’s entire universe was the caged room in the cellar. She knew little kindness and received only enough food to stay alive. She understood nothing of the world above stairs. She would have died in the room of her childhood, but her world changed the day she could take no more. Her life began the day she killed her mother.

Brandt the alpha of the Northern Pack has loved the same woman for hundreds of years. Each day his heart breaks slowly because she does not return his love. Having no will to live, he invites death through challenges for alpha.

Brandt’s life changes when he hunts a feral werewolf for killing a human. Delivering death to the beautiful white she-wolf is his job but one bite of her sweet blood alters his heart and now he must tame the woman who has never known love.


Emily’s Story is the second book in the Fang Chronicles series and can definitely be read as a stand-alone. The whole concept and presentation of the paranormal’s, and all characters are original and intriguing. I enjoyed this one much more that the first. All-in-all it’s a series that is definitely worth looking in to for all fans of the genre.

Emily’s story is a very sad one with a VERY happy ending. Raised in the darkness and treated as if she’s a sinful entity by her own natural mother. She’s believed herself to be evil, unworthy and too different to belong. After almost two decades of believing all of this, things finally change and for the better I might add. Especially since the day she met Brandt (sigh).

Brandt’s story is very different from Emily’s. He’s known what he is and was raised as a child should be. He now stands as alpha for his pack. But he holds one HUGE problem on his shoulders. The one he thought to be his mate is actually another’s. He refuses to give up on her and because of his refusal, his pack is in shambles. All of this changes the very minute he meets Emily.

Love the character growth that occurred with both main characters and the adjustments they both made for one another. It’s a deeply emotional and touching story that lingers in your mind long after you’re through reading and it leaves you wanting more in the very best of ways. I CANNOT wait to get my hands on the next in the series :)