Cami Avesque is a shy, wannabe journalist, working for the largest newspaper in Ohio. She’s stuck editing classified ads until she lands her big break. That break comes when the only female sports reporter goes on bed rest for the remainder of her pregnancy. For some reason, Cami is chosen to cover The Slam, a rugby team in Colt, Ohio. They have a chance of going all the way to the Rugby League Championship.

Unfortunately, Cami has a poor track record with jocks and going all the way is one of her problems. Because of her past, she hides her assets behind clothes that are a size too large and big glasses that camouflage the sexual sizzle that eats ripped bodies for lunch. Shy, she must remember she’s shy. If only man muscle didn't bring her wild side out to play she might survive a rugby try. 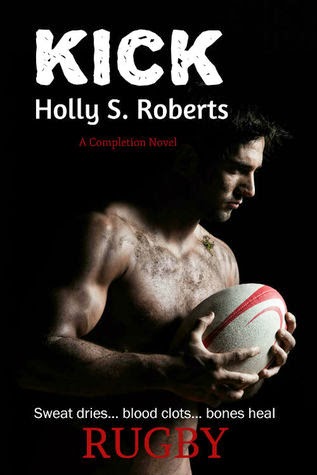 A low groan, coming through the closest door, had me walking in that direction. The door was propped open a few inches. With the next groan, I stopped without going inside. My stomach clenched. Who the heck was on the other side?

I was on time for my interview, but maybe I was interrupting an early morning quickie. Or God forbid he was in there by himself. I straightened my shoulders, nervously ran my hands down the sides of my unfitted navy jacket, and timidly approached the door. He was only a jock after all, and my expectations weren’t too high.

Eye contact, eye contact, I repeated to myself for the hundredth time since leaving my hotel room.

I peeked around the room until I saw two men—one lying face first on a table with nothing on but a small towel across his butt cheeks. The other man dug into the naked guy’s oiled muscles with his fingers and palms. Oh my. I couldn’t look away and practically drooled over the raw muscle lying on that table. Who was I kidding? All my lady parts came to instant attention at the display of pure dazzling brawn. Dammit, not again.

“I think your reporter’s arrived,” said the man giving the massage.

The naked man lifted his head. Our gazes locked. I’m sure my jaw fell to the floor, because no picture did those eyes justice. They were baby daddy gorgeous.

“I’m good, Curtis. Thanks.” He gave another low moan as Curtis dug one last time into his back.

Curtis added a small series of chops, picked up a towel to wipe his hands, and walked around me on his way to the door. He gave a small nod and then it was only me and a naked Van Stelson alone in the room. Van rolled to his side before dropping his feet over the table. Somehow the towel slid forward and pooled between his legs. I gulped.

He grinned, and his eyes took a quick scan of my body. “I’m walking to the shower and I’ll be out in two. Your choice if you wanna watch, but the towel isn’t going with me.”

His low voice sent a shiver across my skin. As his words sank in, heat raced to my cheeks. I spun so fast I lost my balance and had to use a side table to keep from falling on my ass. Van’s husky chuckle sent shivers clear to my toes. What was I supposed to do now? I answered my own question; stay upright and absolutely do not turn around. I heard the water turn on. Though I couldn’t peel my eyes from the naked man when I walked in, I had noticed the entire back of the room was tiled and had shower heads and nozzles interspersed. Nothing blocked the showers from view and now all I could think about was water sliding over oiled muscles. I fought a groan. If I was smart, I’d walk out of the room immediately. It was happening again, and something wild was taking over intelligent, practical Cami and turning her into a ball of hormonal lust.

The water shut off.

As always I'm a very happy reader after reading one of Holly Robert's works. Oh and I'm also in love (like WHOA love) with Joel (shh, don't tell Cami!) Kick is a fun, romantic, touching and sensual read that any fan of the genre will enjoy ;)

Cami's had a run of bad luck in the relationship department. So badly that she basically shut herself out of the dating world by covering up her goodies so no one would come on to her. Luckily she still continues on with her dreams and all of her hard work just might have finally paid off! Or it could be another slight run of bad luck...
Muscles, muscles and more muscles. But there's only one for her and man is he a great catch!

I have to say, even though I don't know SQUAT about Rugby, I really got into the story and found myself curious about seeing it played in real life!

“You’re beautiful.” He stared into my eyes not moving or, more precisely, making a move.

Without thinking, I went to my tiptoes and pressed my lips gently to his. His arms circled me or I would have fallen. He pulled me against his rock-hard chest making me feel stable. No… that wasn’t it… invincible. Cami the prude was gone.

I needed to fuck Van Stelson.

The kiss changed as Van took over. His fingers sought the zipper on the back of my dress. Once the material was loose, he pulled the sleeves down, exposing my lace bra and dipping his rough fingertips under the material.

“God, your tits are incredible,” he said with a whispery groan.

Every nerve ending on my body centered on each stroke against my breast. Before I realized what I was doing, my arms were around him, my fingernails digging into his back. A dizzying whirl of sexual need shot straight to my inner thighs. His mouth took complete control. He sucked my lower lip continuing his assault with gentle nips. I could no longer think past the driving ache that wanted to explode from my body. Never had I felt such blinding need. He pushed my dress past my hips until it pooled on the floor. I had no idea that he unclipped my bra until it fell to the floor too. He swung me into his arms without ending the kiss. My shoes fell off along the way. I couldn’t think. I didn’t want to think.

His bedroom was dark, but he knew where the most important piece of furniture was, and within seconds of entering, I was on it. His chest, I wanted to feel his bare chest against my naked breasts. I started working the buttons, but he had no patience. He pushed my fingers aside and buttons went flying. I was drunk, he was sexy as hell, and now all I wanted were his pants. Coming off. Now.

He pulled back slightly so he could help me with his zipper. I couldn’t think past where I needed his body next. He shuffled above me and I heard a drawer next to the bed open. A minute later, the unmistakable sound of a condom wrapper being torn open. God, I hadn’t thought that far, but good. So good.

The tip of his cock pushed against me.