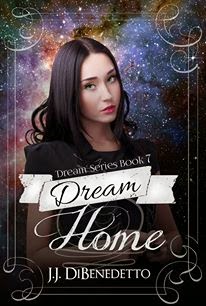 About the Dream Series
What if you could see everyone else’s dreams?  That’s the question Sara has to wrestle with in the Dream Series.  We first meet her as a shy, bookish college student who doesn’t think there’s anything extraordinary about herself.  And then the dreams start…
Over the course of the series, Sara learns to live with these supernatural dreams and all the trouble they plunge her into.  At the same time, she grows from a student to a practicing doctor; and from a single girl to a wife and mother.  But every time she thinks she’s got everything figured out, life – and her extraordinary dreams – teach her that she’s always got more to learn…

Blurb for Dream Home (book 7 in the Dream Series)

“Oh, my God, I’m not even starting the job for four months!  How can I have an enemy already?”

But her new life is not quite perfect.  Her husband and her children are fitting right in, but before Sara even shows up for her first day of work, her coworkers are dreaming about getting rid of her.

If that wasn’t bad enough, the one friend she’s made is dreaming nightly about a disaster that could wipe out the entire town…and Sara is beginning to think he might be right…

Dream Home is the exciting seventh book in the Dream Series.

Blurbs for the previous books in the series

Dream Student (Book 1)
What would you do if you could see other people’s dreams?  If you could watch their hidden fantasies and uncover their deepest, darkest secrets…without them ever knowing?
Sara Barnes is about to find out.  She thought that all she had to worry about was final exams, Christmas shopping and deciding whether she likes the cute freshman in the next dorm who’s got a crush on her.
But when she starts seeing dreams that aren’t hers, she learns more than she ever wanted to know about her friends, her classmates…and a strange, terrifying man whose dreams could get Sara killed.
“Dream Student” is the thrilling first installment of the Dreams series.

***
Dream Doctor (Book 2)
“I didn’t expect to be woken up by someone I don’t know dreaming about killing somebody.  I thought I was done with that once and for all…”
But Sara’s not done with it.  As if adjusting to life as a newlywed and starting medical school weren’t difficult enough, she’s started seeing the dreams of everyone around her, again.  Before everything is said and done, those dreams might destroy Sara’s hopes of becoming a doctor, wreck her marriage and even end her life…
“Dream Doctor” is the thrilling second novel in the Dreams series.

***
Dream Child (Book 3)
"I would give anything to take this away from her.  I would gladly go back to having the nightmares myself – the very worst ones, the ones that had me waking up screaming in a pool of my own vomit – rather than see Lizzie go through this..."
As a resident at Children's Hospital, Sara can handle ninety hour workweeks, fighting to save her young patients from deadly childhood diseases.  But she's about to be faced with a challenge that all her training and experience haven't prepared her for: her four-year-old daughter has inherited her ability to see other people's dreams...
"Dream Child" is the suspenseful third novel in the "Dreams" series.

***
Dream Family (Book 4)
"Why is this so hard for me?  Why am I having so much trouble?  Why do I feel so helpless, so hopeless?  What the hell is wrong with me?"
After tangling with murders and mobsters, not to mention medical school and three years of residency, Sara thought she could handle anything.  And then the police show up without warning at her new office and arrest her for a crime she can't possibly have committed.  Sara's confidence, and her grip on reality, is shattered during one terrifying night in jail.
Now, the very dreams that have endangered her life and driven her to the edge of madness may be the only thing that can help Sara find herself again...
"Dream Family" is the powerful fourth novel in the "Dreams" series.

When her own dreams are visited by a mysterious woman in a red dress, Sara realizes she has something she never expected: a counterpart, someone outside her family who shares her talent to see other people’s dreams.

When the woman in red keeps showing up in other dreams as well, leaving ruined lives in her wake, Sara knows she has something she never imagined: a nemesis.

Now, Sara must track the woman in red down in the waking world, before she’s forced to fight for her life in her dreams…

“Waking Dream” is the exciting fifth novel in the “Dreams” series.

***
Dream Reunion (Book 6)
"I wish someone - my mother, my husband, anybody - would really let me have it, instead of telling me everything's not my fault when it obviously is..."

Sara's seen the cost of interfering in other people's dreams firsthand; it's measured in ruined lives and cemetery plots.

When her supernatural dreams start up again, Sara is faced with problem after problem. And the only solution she can see is the one she's sworn never to attempt - changing the minds of the dreamers from the inside-out.

Sara thought that fighting against serial killers, mobsters and crooked politicians was difficult, but she's about to come up against the most difficult foe she's ever faced: her own conscience.

Dream Reunion is the emotional sixth book in the Dream Series.

What if you could see everyone else’s dreams?

Sara Barnes has just discovered that she can.  And this gift – or curse – will lead her on an extraordinary journey.

Follow Sara as her newfound ability leads her into adventures she never imagined.  She will hunt down a serial killer, investigate a plot to murder one of her teachers, unravel a conspiracy between a mobster and a corrupt politician and face off against her nemesis: a woman who shares her talent, but uses it to destroy lives rather than save them.  And Sara will have to manage all that while finishing college, becoming a doctor and falling in love, too.

Here are the first five books of the Dream Series, along with bonus material created especially for this collection.  Included in this set are DREAM STUDENT, DREAM DOCTOR, DREAM CHILD, DREAM FAMILY and WAKING DREAM.  In addition, you’ll find the short story BETTY & HOWARD’S EXCELLENT ADVENTURE starring Sara’s parents.  But most of all, when you open this box of dreams, you’ll find romance, suspense, humor and plenty of heart…

Bio:
J.J. (James) DiBenedetto was born in Yonkers, New York. He attended Case Western Reserve University, where as his classmates can attest, he was a complete nerd. Very little has changed since then.
He currently lives in Arlington, Virginia with his beautiful wife and their cat (who has thoroughly trained them both). When he's not writing, James works in the direct marketing field, enjoys the opera, photography and the New York Giants, among other interests.
The "Dreams" series is James' first published work.